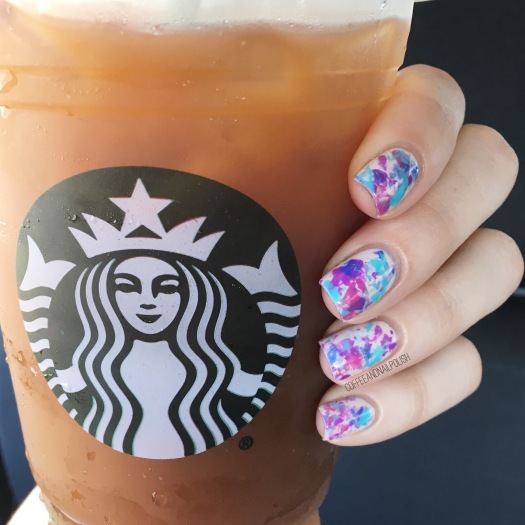 It’s officially Summer, & even though the weather here in Halifax is being less than agreeable (go away clouds), I just want to wear pretty dresses & sandals & enjoy the sunshine. In the meantime, I decided some bright Saran Wrap splatter nails would be appropriate. Maybe it will even encourage the sun to stick around longer than a few hours! 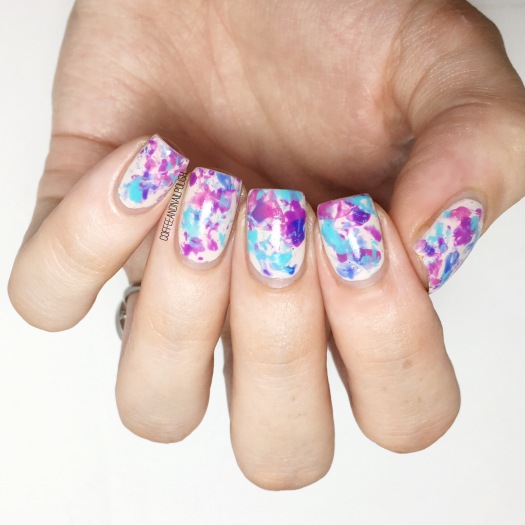 For this manicure, I used: 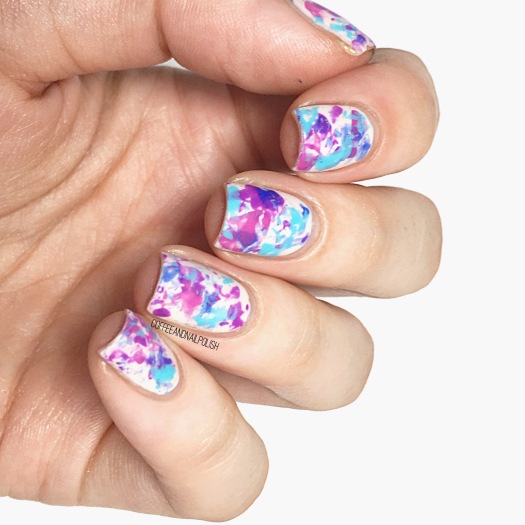 I seriously love how these turned out–the blues & purple work so well together. My barista even complimented me on my nails, which always makes me feel good when someone other than my husband notices. I am just never disappointed when I pull out the plastic wrap for this design! Sometimes it can be messy, but always easy to clean up (way easier than cleaning up a classic splatter manicure!) & the end result is just so much fun.

What do you think of my Saran Wrap design? What’s your favourite Summer manicure design?  Let me know in the comments below!

So I had a fairly exciting weekend–the Mr and I got married!  Obviously when we started talking wedding I couldn’t help but trying to figure out my wedding mani. I knew I wanted blue incorporated, and I knew I wanted floral. In the end they ended very different from what I had originally intended to do, but I simply loved them! 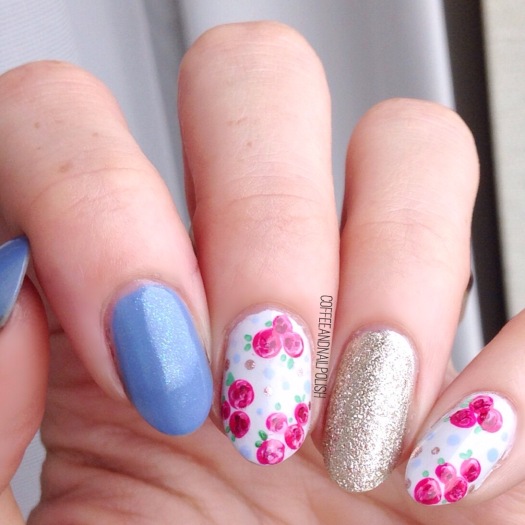 The polishes I used for this mani were:

I also wore Sally Hansen original formula Pacific Blue on my toes which peeked out from my wedding shoes.

And for those curiously what I wore with my pretty wedding nails, here are a couple casual shots from the day. 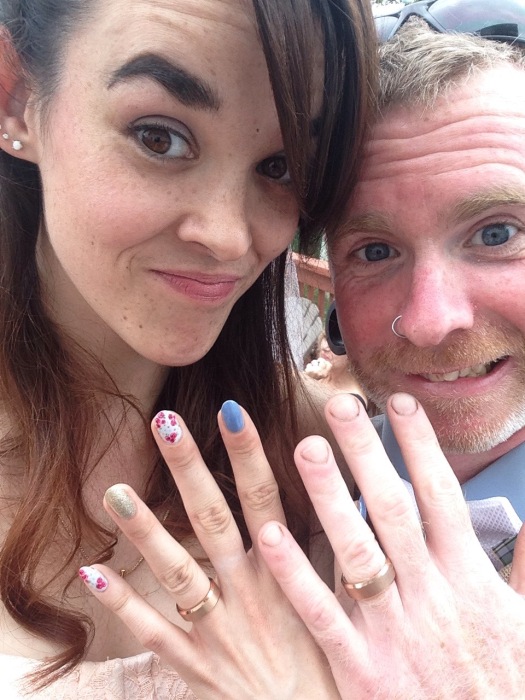 Have a beautiful week my loves! 💗💗💗

Today’s post is totally inspired by perfectlynaileduk, who does some of the most awesome leopard print manicures I’ve ever seen. Actually she does the most awesome manicures in general! Seriously, you need to go check her manicures out right now if you haven’t yet!

The other day I was trying to think of something to do on my nails when I remembered a picture of a blue and gold leopard print manicure she had posted, and instantly knew I wanted to recreate it! I decided to go with some darker, more fall-toned colors. 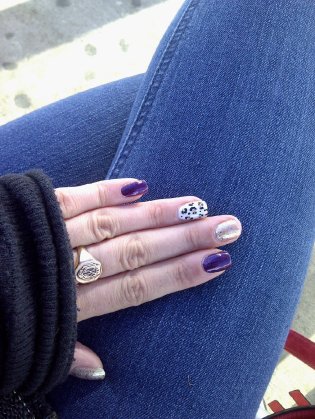 Is there any better combo than purple and gold? I think Gilded Rose by Maybelline Color Show has to be my new favorite gold polish, especially because of the pink undertones. I never used to like gold, but lately I’ve been completely obsessed with all things golden, especially nail polish. Maybe that’s why I seem to own so many now haha.

Also, you may have noticed I had a pretty obvious break on the middle finger of my left hand. It happened at work (what else is new…) and I was SO mad, as my nails have grown the longest they’ve been in a long time. I’ve decided though, for right now at least, I’m not going to file everything down to meet my shortie. The rest of my nails are holding strong and super healthy, so for right now I’ll stick with the one awkward shorty until the rest of my nails start to catch up. 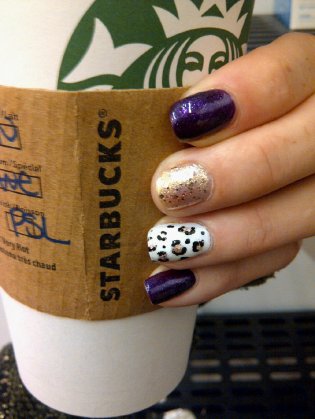 So what do you think of this gold and leopard print manicure?

What is your favorite color combination together?

Finally! I’m feeling nail art again after a good short while of being uninspired. Does anyone else ever get like that? You want to paint your nails with something pretty, but every time you try you just hate everything? (I hope it’s not just me… I’ll feel silly!) Today’s nails were just me really, really wanting to do some nail taping, as I don’t often do it. I also really, really wanted to wear Cashmere Bathrobe by Essie, as I adore it for Fall and I don’t think I’ve worn it since last fall.

As you can see, I managed to do semi straight taping. I think I’ve figured out it’s the tape I’ve been using that’s made me not want to do tape manicure. I have a roll of very thin painters tape, which I bought because I thought it would be perfect. Unfortunately, for some reason, it just doesn’t like sticking to my nails well enough and–because it’s green–I can’t see if I’ve made my lines straight enough. Oops. I think I’ll be switching back to just regular old scotch tape for manicures like this from now on.

So what do you think of this manicure? I must say–I really, really like how it turned out. I’ve been feeling so blah nail art wise for a while, but now that I’ve broken out of that funk I’m hoping I can get back to playing with my polish as it makes me so happy. =)  Hopefully I’ll have a fun new manicure to share with you coming up.

Because I have a huge love affair with all things DC superheroes, I really wanted to do another Superhero inspired manicure. I’ve only done a couple to date: A Flash manicure last summer, and my Spiderman nails. Now most people who know me would figure I would do Batman nails since he’s my all time favorite (I even have a Batman tattoo). Instead, I decided to go with my second favorite: Wonder Woman. 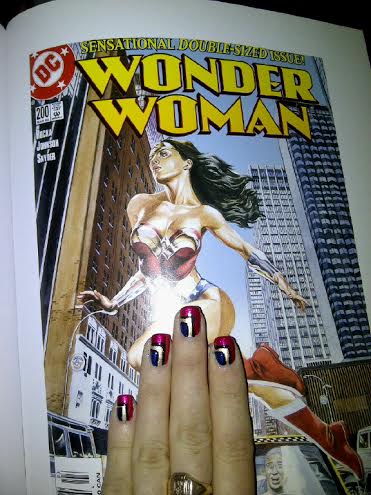 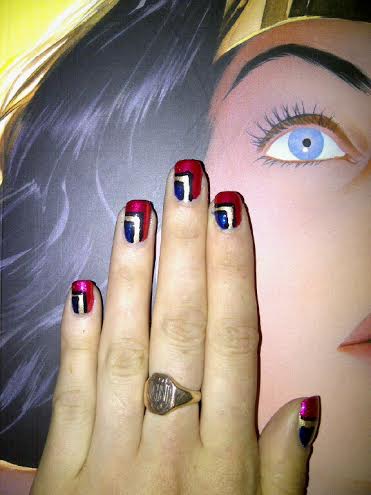 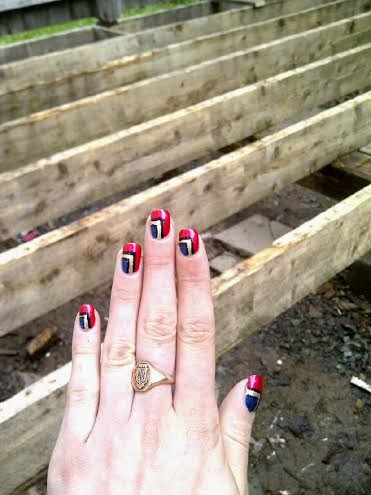 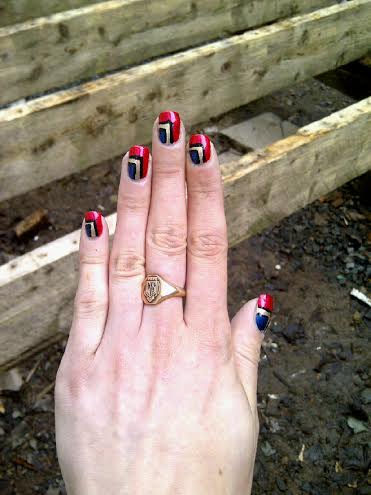 This manicure was pretty simple to do. I painted my nails all the gold color, and waited for them to dry over night. Then, I taped off the L shapes, and painted on first my creme blue and red, followed by my Revlon polishes. I peeled that off carefully, then outlined with my black and applied top coat. And tada! My nails are super powered! 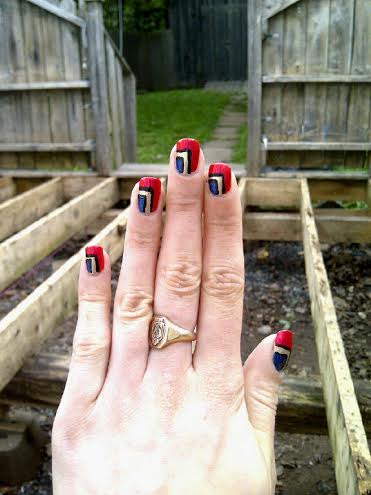 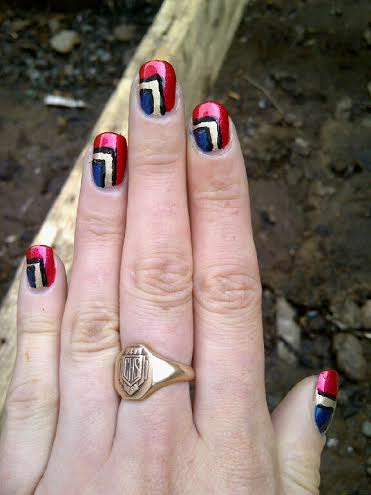 The only thing I wish was that I had little star glitters that I could have added to my blue to make it really look like her costume. Next time! These would go perfectly with my Wonder Woman costume (which I wore for Halloween a couple of years ago.) I might even have to come up with some more Superhero inspired manicures–Batman, for sure, but all my other favorites as well. I remember seeing an awesome Star Sapphire manicure on pinterest a while ago that I feel absolutely in love with.